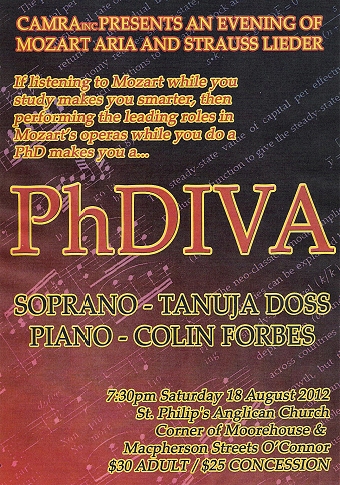 If listening to Mozart makes you smarter, then performing leading roles in Mozart operas while you do a PhD made Tanuja Doss a …

Since moving to Canberra, she has studied voice under Patricia Whitbread with coaching from Colin Forbes, and completed her AMusA in 2003. She played the role of the Countess Rosina Almaviva in CAMRA's production of Le Nozze di Figaro in 2007; it was CAMRA's first full operatic production as well the first for Tanuja. Since then, she has also performed excerpts from Cosi fan tutte (in CAMRA's 2008 production) as the unlucky Fiordiligi. In 2009, Tanuja performed the roles of Vitellia in La Clemenza di Tito and Donna Anna in Don Giovanni to critical acclaim, for of Classical Opera-tives, an offshoot of CAMRA.

Tanuja has also studied and performed English art song, French melodie and German lieder. In 2011, she won first prize for English Art Song at the Australian National Eistedfodd for her rendition of 'Nocturne', from Michael Head's Over the Rim of the Moon. In 2010, Tanuja performed a series of Strauss Lieder as part of CAMRA's Month of Sundays recitals.

In addition, Tanuja has performed soprano solos in a number of concerts and oratorios in Canberra, including for Pergolesi's Stabat Mater, Handel's Messiah, Britten's Rejoice in the Lamb, Rutter's Requiem, Bach's St. John Passion, and Hildegard von Bingen's Ordo Virtutum.

Together with her music studies, Tanuja completed a Masters of Economics at the Australian National University in 2003, and went on to do a PhD in economics at the same university. Her thesis explores the linkages between saving and investment and the implications for economic growth in developing countries. She was awarded her degree in July 2012.

In 2013, Tanuja expects to be reprising the role of Donna Anna in CAMRA's forthcoming production of Don Giovanni. In the meantime, she plans to travel, catch up on her recreational reading and ponder what to study next.

On graduating from the Sydney Conservatorium of Music, Colin Forbes became Lecturer in Piano at the Conservatorium as well as pianist and percussionist with the Sydney Symphony Orchestra. He later joined the Australian Opera as a repetiteur and has also worked with other leading concert organisations including the Australian Chamber Orchestra, Synergy and the Australia Ensemble. A study tour of Germany took Colin to the Essen Hochschule to study piano with Paul Badura Skoda. Colin subsequently taught and performed in Germany. On returning to Australia he became Head of Keyboard at Ascham School in Sydney, later moving to Canberra in 1992 to take up the position of repetiteur at the Canberra School of Music. Colin gave sonata recitals with the violinist Erich Binder (Concert Master of the Vienna Philharmonic Orchestra) on both of his visits to Australia.

Thank you to the Reverend Rebecca Newland and the St Philip’s Community for their love of music and the encouragement and support they give to performers and performances.

Thank you to the Canberra Academy of Music and Related Arts (CAMRA) for organising and producing such high quality musical events, and for investing so much in the development of amateur performers. And thank you to the CAMRA committee for supporting PhDIVA, especially to Denise Manley and Madeleine Rowland for publicity and front of house.

Thank you to Leighton Mann and his team for the seating, the stage, and the set, and to Food@StPhilips for all the tasty goodness on offer at intermission.

Thank you to Leila Fetter for agreeing to be MC and to do all the talking so that I wouldn't have to.

Thank you also to all those of you who put up with my drama while I was completing my thesis and who listened to my sad stories in the year and a half my thesis spent in purgatory waiting to be examined.

And last but not least, thanks to all of you in the audience for coming to PhDIVA and especially to those of you who have come to and supported me in any or all of the earlier shows from which this program is drawn.