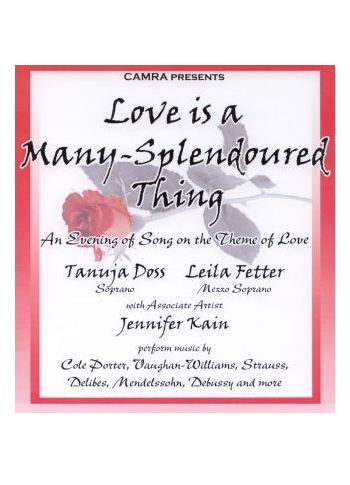 On 13 October 2007, Tanaja Doss (soprano) and Leila Fetter (mezzo) were accompanied by Jennifer Kain OAM (piano) and Colin Forbes (piano) for Love is a many-splendoured thing a evening of song on the theme of love.

Love has been the subject of more art, music, literature, poetry and drama than anything else. It transcends genre, culture, language, race and time, crossing borders and conquering distance.

The theme, the concept of love, is so broad and encompassing: love of lovers, love of self, love of family, love of God, love of cities, love of love itself, true love, star-crossed love, thwarted love, perfect love, inappropriate love, enduring love and unrequited love. By any reckoning, love is a many-splendoured thing.

Tanuja Doss has studied voice since she was fourteen. On leaving high school, she continued to study music and voice with private lessons from Jean Schofield. Since moving to Canberra, she has studied with Patricia Whitbread. She completed her A Mus A in 2003.

Tanuja has performed in several CAMRA productions, most recently as the Countess Rosina Almaviva in Mozart's The Marriage of Figaro. Other performances for CAMRA readfile as the virtue Victory in Hildegard von Bingen's Ordo Virtutum and as soloist in Handel's Messiah and Pergolesi's Stabat Mater.

Tanuja was also a soloist in the Llewellyn Choir's performance of Britten's Rejoice the lamb and Rutter's Requiem. In 2006, she performed Britten's song-cycle On this Island at Art Song Canberra's 'Four Canberra Singers' recital.

Leila has studied singing with Patricia Whitbread since 1996 and is a regular member of CAMRA's musical productions. Following her success in Iolanthe in 2000, Leila was Lady Jane in Patience in 2001, and Katisha in 2002's critically acclaimed Mikado.

In 2005 Leila broadened her horizons with a solo role in Canberra Repertory's 'Old Time Music Hall', and has also performed in Benjamin Britten's Rejoice in the Lamb with the Llewellyn Choir. In 2007, Leila was a soloist in Pergolesi's Stabat Mater and in Haydn's 'Nelson' Mass for the Llewellyn Choir and Haydn Bande. She recently completed a successful season as Marcellina in CAMRA's 2007 production of The Marriage of Figaro.

Jennifer Kain has been involved in community music in Canberra for many years as a repetiteur and accompanist on piano, organ and harpsichord.

She was a repetiteur for Canberra Opera and assisted in the preparation of community choir events such as the Mahler Symphony No. 8 for the Canberra Multicultural Festival in 2000. She has worked with many conductors through her involvement with Canberra Choral Society, Musica da Camera and other community choirs and orchestras. She has accompanied many singers and instrumentalists for recitals, competitions and examinations.

In 2002, Jennifer was awarded the Order of Australia Medal for services to community music in the ACT. She currently teaches the piano privately and at two Canberra schools.


On graduating from the Sydney Conservatorium of Music, Colin Forbes became Lecturer in Piano at the Conservatorium as well as pianist and percussionist with the Sydney Symphony Orchestra. He later joined the Australian Opera as a repetiteur and has also worked with other leading concert organisations including the Australian Chamber Orchestra, Synergy and the Australia Ensemble. A study tour of Germany took Colin to the Essen Hochschule to study piano with Paul Badura Skoda. Colin subsequently taught and performed in Germany. On returning to Australia he became Head of Keyboard at Ascham School in Sydney, later moving to Canberra in 1992 to take up the position of repetiteur at the Canberra School of Music. Colin gave sonata recitals with the violinist Erich Binder (Concert Master of the Vienna Philharmonic Orchestra) on both of his visits to Australia.

… the Reverend Robert Lamerton and the community of St Philip's church for their support.
... Denise Manley, Tony Fortey and Madeleine Rowland for the supper and front-of-house support
... Denis Hackney for the poster design