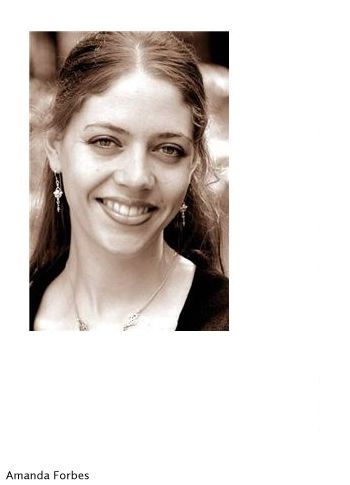 Soprano Amanda Forbes completed a DipRAM on the postgraduate opera course at the Royal Academy of Music in June 2006 studying with Elizabeth Ritchie. She holds a Bachelor of Music with first class honours in performance from the University of Melbourne.

Her operatic roles for Royal Academy Opera readfiled Queen of the Night in Mozart's The Magic Flute, La Fé in Massenet's Cendrillon, Sandrina in Mozart's La Finta Giardiniera, and the Soprano Actress in Judith Weir's A Night at the Chinese Opera. Amanda's other operatic roles have readfiled Zdenka (cover) in Strauss's Arabella for Garsington opera, Adele (cover) in Die Fledermaus for the Scottish Opera, and in 2006 she was a member of the Glyndeboume Festival Opera Chorus.

At the time of this Canberra concert, Amanda's concert and oratorio performances had readfiled as soprano soloist in Mozart's C Minor Mass at Bristol Cathedral, Handel's Silete Venti and Mozart's Exultate Jubilate with the Amersham festival Orchestra, Vivald's Gloria with the Cambridge Philharmonic, Mahler's Symphony No. 4 with the Royal Academy of Music Chamber Ensemble, in Haydn's Nelson Mass with the Portsmouth Choral Union and in recital at St James Piccadilly in conjunction with the Royal Overseas League. She has sung with the English National Opera, and at the Wigmore Hall.

In 2003 Amanda won the Australian National Aria and the Joan Sutherland Society of Sydney Vocal Scholarship, and in 2005 the Richard Lewis/ Jean Shanks Award from the Royal Academy of Music. Her studies at the Royal Academy of Music were supported by a Rae & Edith Bennett Travelling Scholarship from the University of Melbourne. In 2006 Amanda was a finalist and prize winner in the Royal Overseas League Arts Competition, and semi finalist in the Kathleen Ferrier Competition.

At the time of this concert in Canberra, Ms Forbes was a trainee in the 2006-07 course of the National Opera Studio in London