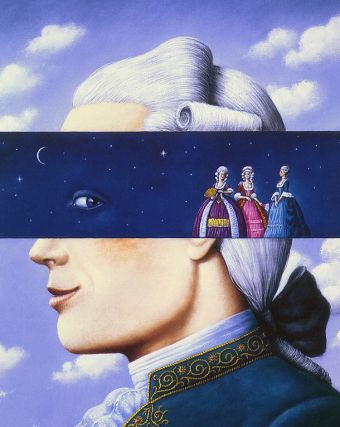 ACT ONE. Don Giovanni's attempted seduction of Donna Anna results in a duel in which he kills the Commendatore, who happens to be Donna Anna's father. Don Giovanni escapes the scene of the crime undetected with his servant Leporello, as Donna Anna and her fiancé, Don Ottavio, vow vengeance upon her father's murderer. Don Giovanni next encounters Donna Elvira whom he had seduced by a promise of marriage. After he departs, Leporello, in the famous "catalog aria," enumerates to the angry and betrayed Elvira the varied and extensive sexual exploits of his master, including 1,003 in Spain alone! On the way to her wedding, Zerlina, a country girl, is approached by Don Giovanni for less than noble purposes.

After Leporello leads Masetto, Zerlina's bridegroom, away, the Don waves a hand in the direction of his castle, and suggests that she accompany him there so they can be married at once. His flirtation with the minx is interrupted by Donna Elvira who warns the girl and urges her to flee. Elvira also attempts, with limited success, to arouse the suspicions of Donna Anna and Don Ottavio about Don Giovanni. But it is not until the Don takes leave of Donna Anna that she recognizes his voice as that of the man who killed her father. A great ball is in progress in Don Giovanni's castle at which time Zerlina reassures her bridegroom, Masetto, of her love and devotion to him. Nonetheless, he attempts to seduce Zerlina a second time, but his efforts end in failure. Elvira, Donna Anna and Don Ottavio, who have joined together, appear at the ball as masqueraders, seeking vengeance on Don Giovanni, hoping to expose his wickedness before the entire assembly. They successfully prevent him from seducing Zerlina, but with his sword in his hand, he escapes from his pursuers.

ACT TWO. Exchanging his clothes for Leporello's in order to serenade and deceive Donna Elvira's maidservant, Don Giovanni, disguised as Leporello, persuades Donna Elvira to come down from her balcony, and succeeds in sending her off with Leporello whom she believes to be her Don. At this time, Masetto enters and encounters the Don whom he thinks is Leporello. When he tells him of his plans to murder the profligate Don who has been accosting his bride-to-be, Masetto receives an unexpected pistol whipping from the Don who then flees from the scene. Zerlina enters and comforts the mangled Masetto, suggesting to him that if he will go home with her, she can give him a remedy much better than that of any pharmacist!

Meanwhile, Leporello cannot elude Elvira who thinks him to be Don Giovanni. Anna, Ottavio, Zerlina, and Masetto enter in pursuit of revenge on Don Giovanni, but Elvira pleads with them to spare her lover's life. Leporello finally discloses his true identity, and in the confusion which ensues, he is able to make a successful escape. Leporello rejoins Don Giovanni in a cemetery presided over by a statue of Donna Anna's father, the Commendatore. Their laughter at the evening's events is interrupted by the ominous "sepulchral" voice of the Statue which announces that the Don's mirth will soon end, and he bids them to leave the dead in peace. After Leporello reluctantly reads the statue's inscription at the Don's bidding ("Here I await vengeance on the wicked man who brought me to my death"), Don Giovanni, in the spirit of Prometheus, invites the Statue to dine with him the next evening. The invitation is promptly accepted.

The next evening finds Don Giovanni and Leporello carousing at a festive dinner. Donna Elvira bursts in and earnestly entreats the Don to mend his evil ways, but when he makes fun of her impassioned request, she departs. The statue of the Commendatore then enters the room as the Don's especially invited guest. The Stone Statue ironically extends an invitation to the Don to dine also with him, an invitation which he accepts. The statue of the Commendatore offers Don Giovanni one last chance to repent, but he adamantly refuses any such exhortation. As the statue of the Commendatore departs, flames appear from every direction, and Don Giovanni, engulfed by fire and smoke, is swept away into hell. Leporello informs the remaining parties of Don Giovanni's fate whereupon each of them announce their future plans: Donna Anna and Ottavio will postpone their wedding to allow for an entire year for mourning; Donna Elvira will enter a convent; Zerlina and Masetto will go home to dinner, and finally, Leporello announces that he will seek a new and better master. And they all rejoice at the end of evil doers!
—Acknowledgement: Musicon