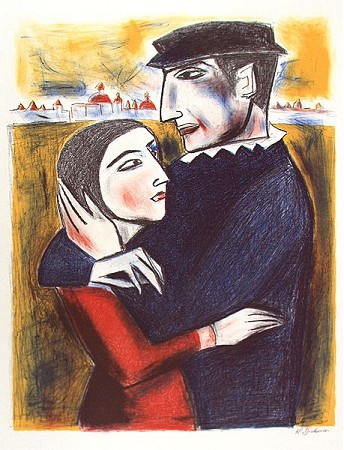 A careful study of Don Giovanni shows clearly that what was in the mind of Da Ponte and Mozart was to repeat the success of Figaro. Here again Da Ponte adapted an older play; but this time, instead of having a carefully finished comedy to translate, he had only an older Italian libretto to re-write, the last of a long line of adaptations going back for two hundred years.

... The old story of Don Giovanni was the puppet play known to everybody, laughed at by everybody, and yet eternally new. It was the obvious subject to repeat the success of Figaro; it was the story of the gentleman of pleasure and his comic manservant. That comic servant, who appears in hundreds of operas, is Harlequin, here and in Figaro—the knave who looks like a fool, the mouthpiece through which the poet claims his right to criticize the world, the link between the stage and the audience. ...

Why so many people, especially those of an older generation, should insist on taking Don Giovanni as a serious opera is a curious problem of musical psychology and aesthetics. In the Byronic age people wanted all music to be romantic; later on Mozart became a classic, and every great singer, male or female, had to pass the test of being heard in the appropriate Mozartian part. Don Giovanni, composed for a tiny theatre, was transferred to the enormous stages of Berlin, Parish and London. Intimacy of interpretation became impossible; and gradually the opera became so famous that only singers of, established reputation, and of corresponding age and bulk, were expected to appear in it. By that time the story of the opera had become a thing to which nobody gave a moment's thought; one went to see Lablache as Leporello, or Patti as Zerlina. The character of Don Giovanni himself fascinated men of letters—and it must be remembered that Don Giovanni was not the sole property of Mozart—so that all sorts of attempts were made to explain his amorous propensities and turn him into a sort of Nietzschean superman, in order to evade the difficulty of reconciling his conduct with the ordinary behaviour of a gentleman.

The simplest plan is to take the opera as its author and composer intended—as an amusing comedy, with a touch of social satire and a great deal of fantastic impossibility. ... And those who are obsessed by Don Giovanni's irresistible sex-appeal may be reminded that in Mozart's opera every one of his love affairs lands him in a humiliating and ridiculous situation.