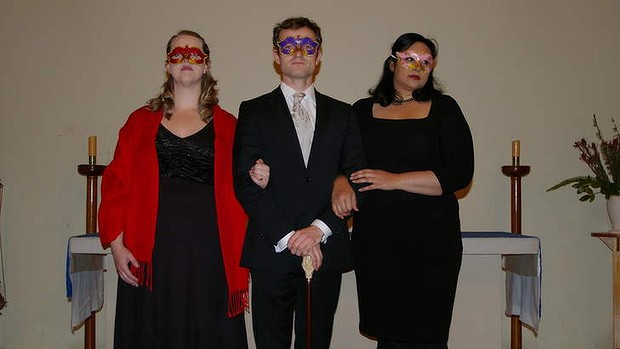 It's early on a holiday Monday morning and outside a shroud of fog wraps the streets of O'Connor. But inside St Phillip's Church, young performers are already firing up for a rehearsal of Mozart's opera, Don Giovanni. Colin Forbes, co-director of Canberra Academy of Music and Related Arts (CAMRA) with his wife, Patricia Whitbread, is at the piano, while she keeps one eye on the score and the other on the singers as they move and sing.

"Those three chords," she suddenly interrupts, "Let's use those like this—" She directs each of the three singers to turn in sequence. It's a positive enhancement to the dramatic effect.

CAMRA was formed in 1997 by Forbes and Whitbread to give young singers a chance to strut their operatic stuff along with other musical offerings: favourite Gilbert and Sullivan operettas such as Iolanthe, The Mikado, The Sorcerer and Patience, John Gay's The Beggars' Opera, several performances of Handel's Messiah and work by the mediaeval composer Hildegard of Bingen. Two other operas have been presented previously: Mozart's Bastien und Bastienne and Purcell's Dido and Aeneas, both short and appropriate works for a group of young singers. Mozart wrote his work when he was 12 years old and Purcell's work was first performed in 1689 by schoolgirls at Josias Priest's School for Young Gentlewomen.

Don Giovanni is an altogether different kettle of fish, but, judging by the quality of this rehearsal, the participants are certainly up for it. "The performers requested this opera," Forbes says. "They love it. It's a very strong cast and this will be a huge ensemble event."

All the performers are either Whitbread's students or have come to Forbes for vocal coaching. They all have day jobs and there are always difficulties getting the whole cast together. For the female roles, there are two alternate casts, but all the male singers will perform at every one of the four performances on July 4, 6, 12 and 13.

Each performance will readfile the entire musical score, but with recitative replaced by spoken English dialogue. "We try to use the music as much as we can," Whitbread says. The musical accompaniment consists solely of Forbes at the piano. "Yes, imagine me as the Berlin Philharmonic," he says.

In these simple surrounds, with a minimal scenery, and costumes that Whitbread describes as "non-descript 20th century", it's the voices that have to shine together and that's what this rehearsal is all about. We've come to the finale of act one, inside the ballroom with festivities in full swing. "If I had Mozart's mobile number I'd call him up and ask him for another two bars," Forbes shouts as a small timing snag temporarily halts proceedings. The characters are masked, but we can easily identify Don Giovanni and his intrepid servant, Leporello, who are attempting to separate Zerlina, whom Giovanni hopes to seduce, from her fiance, Masetto. The action demands assured movement, perfect timing, good acting and fine singing. From dancing to the strains of a graceful waltz, and an almost comic manoeuvering, the atmosphere turns to something darker as Zerlina screams and Donna Elvira, Donna Anna and Ottavio unmask and accuse Don Giovanni of the murder of the Commendatore, the father of Donna Anna. The scene is repeated numerous times and finally each performer is comfortable.

Peter Lawrence, as Don Giovanni, black leather-jacketed, looks the very essence of a man used to leading a woman to an easy seduction. In fact, he teaches legal studies at Cranbrook School in Sydney and coaches rugby teams, snatching the time to drive to Canberra for rehearsals and for the performances, which will be during the school holidays. He has performed other roles with CAMRA, sings with the vocal group Igitur Nos and is an experienced choral singer. Tanuja Doss, who plays Donna Anna, is an economist at Parliament House, Canberra, and sang the demanding role of Dido in CAMRA's past production of Dido and Aeneas.

Peter Smith will sing the part of Leporello; Chris McNee, Masetto; Charles Hudson, Ottavio; and Stephen Hines the Commendatore. Katy Erland will share the role of Donna Anna with Tanuja Doss; Judith Swanson and Alicia Holley will share Donna Elvira; and Rosemary Lohmann and Madeleine Rowland will share Zerlina. There will also be a chorus of four men and four women.

Forbes and Whitbread are joint directors. "I've worked this opera many times before," Forbes says, "and this is a very strong cast. There's amazing camaraderie among them all."