While sitting in a church pew, it's rather unusual to be given a warning from the altar that you're about to hear a racy story about a man with loose morals.

Don Giovanni, Mozart's popular opera, has been given a simple production in the limited space of a church altar by CAMRA, the Canberra Academy of Music and Related Arts. It works rather well. Directed by the team of Colin Forbes and Patricia Whitbread and presented in English rather than the original Italian, the show is performed by a mix of local and interstate singers who make fine music together in the good acoustic of St. Philip's Church in O'Connor. 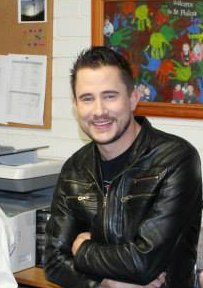 The music is conducted and played on piano only by Colin Forbes and the arrangements are so lush that you don't miss a full orchestra for a minute. Amongst the singers, standouts were Judith Swanson, singing the role of Donna Elvira with fiery passion, Peter Smith as Leporello, servant to Don Giovanni, Charles Hudson as Don Ottavio and Rosemary Lohmann as the peasant, Zerlina. There will be some alternate cast members as the season progresses. When the major ensemble pieces are sung, the roof nearly comes off the church and it's thrilling to hear.

Peter Laurence was a handsome and young Don Giovanni and sang the long and difficult role quite well, technically. However, stronger acting skills would have provided the necessary depth of character missing from his performance. Some other cast members seemed to treat the linking dialogue as just a necessary evil to be got through as soon as possible. The acting skills are there when they sing, but they must act with the same conviction when not singing. The spirited small chorus did a fine job, providing some unexpected and nicely timed flashes of humour here and there.

While clearly a production with a very limited budget, the costumes would have benefited from more overall supervision to achieve a consistency in style. The set of Italianate columns and arches was quite substantial and pleasing to the eye but seemed under-used in an essentially modern dress production.

Productions such as this one presented by CAMRA give important experience to young and upcoming performers and deserve to be supported. Even when you've seen a number of other, more lavish productions of 'Don Giovanni', it's refreshing to see and hear it performed simply in an intimate setting. You hear things in the score that you've never picked up on before.

In addition, CAMRA looks after its audience with great liquid refreshments and a selection of wickedly sweet things to eat at very low prices. All this and an evening of fine music!