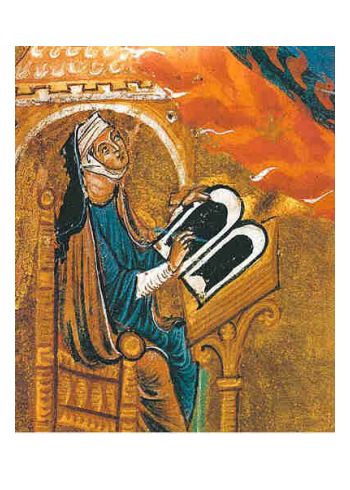 The story of CAMRA's Ordo Virtutum

Tackling Hildegard's Ordo Virtutum was a learning experience for directors and performers. To perform the work in English was a challenge as several translations from the original Latin were blended into a flowing, singable, English text closely as closely woven to the existing notation as was possible.

Then there was the problem of how to sing it. We were guided by two performances, one on DVD by Vox Animae and one on CD by Sequentia (1998). Neither adhered to the true style of Gregorian chant. On further delving, we found that Hildegard paid little heed to structures and guidelines, and created a personal style. Audrey Ekdahl Davidson says "Her musical style could never be mistaken for that of any other mediaeval composer". So, those who have come along expecting to hear an evening of Gregorian chant may be sadly disappointed. The notation we used was from Audrey Ekdahl Davidson's edition, drawn from the manuscript in the Hessische Landesbibliothek, Wiesbaden, and we followed some of her guidelines on production.

The addition of instrumentation has evolved in modern performances of the Ordo. There is no evidence that Hildegard used instrumental accompaniment. For us it is a necessity, as we are not in the happy situation of singing the office seven times a day, and chaos could quite easily resulted without the support of an instrument for tuning. We used a keyboard that had the capacity to simulate some of the sounds of this style of music.

The Virtues were costumed according to Hildegard's visions. She was quite specific about how they appeared, and why they were each dressed in a certain way. We incorporated some of the symbols alluded to in the visions. Other ideas came from the cast. The placing of a token by each Virtue on to the cloak of the Soul was a solution as to "what to do", giving a sense of ceremony and movement in what otherwise might have been a very static rendition. This idea came from one of our number who is Hindu; in the Hindu imagery, the body is thought of as the garment that the soul dons in birth, and discards in death. The idea of placing tokens on the Soul's robe aligns with an idea of "strengthening the flesh" to match the spirit for the subsequent rebirth of the soul. We were delighted to find that Hildegard had in fact been influenced by many religions including Hindu, so we think she would have approved.

Hildegard would also have approved of her Virtues being decked out in their finery—she often had her nuns dress up for performances. We used greenery and flora, which would also have delighted Hildegard�s ecological conscience. It was not by design that the first performance of the Ordo fell on Hildegard's Feast Day. We imagine that divine intervention was at work there.

"Musical harmony softens hard hearts. It induces in them the moisture of reconciliation, and it invokes the Holy Spirit. When different voices sing in unity, they symbolise the simple tenderness of mutual love. When different voices blend in song, they symbolise the blending of thoughts and feelings which is the highest pleasure human beings can know. Let the sweet sound of music enter your breast, and let it speak to your heart. It will drive out all darkness, and spread spiritual light to every part of you." —Hildegard von Bingen, Scivias 3.13.15