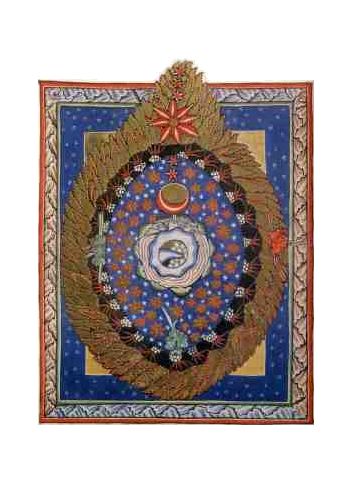 Ordo Virtutum (Order of the Virtues) is an allegorical morality play, or liturgical drama, composed about 1151. It is the earliest morality play by more than a century, and the only surviving medieval musical drama with an attribution for both the text and the music. The original Latin text of Ordo Virtutum is in verse. It may have been performed by the convent nuns at the dedication of the St. Rupertsburg church in 1152, or possibly before the Mass for the Consecration of Virgins at the convent.

The music contains 82 different melodies. All parts are sung in plainchant except that of the Devil. There is an alternation between solo and chorus parts. The Virtues are sung by 17 solo female voices. The chorus of the Prophets and Patriarchs is sung by men and the chorus of Souls is sung by women. But the Devil (a male voice) does not sing, he only yells or grunts for, according to Hildegard, the Devil cannot produce divine harmony.

Ordo Virtutum is about the struggle for a human soul, between the Virtues and the Devil.

In the prologue, the Virtues are introduced to the Patriarchs and Prophets who marvel at the them.
The Virtues are Humility (Queen of the Virtues), Hope, Chastity, Innocence, Contempt of the World, Celestial Love, Discipline, Modesty, Mercy, Victory, Discretion, Patience, Knowledge of God, Charity, Fear of God, Obedience, and Faith.

We hear the complaints of souls that are imprisoned in bodies.

The (for now) happy Soul enters and her voice contrasts with the unhappy souls. However, the Soul is too eager to skip life and go straight to Heaven. When the Virtues tell her that she has to live first, the Devil seduces her away to worldly things.

The Virtues take turns identifying and describing themselves while the Devil occasionally interrupts and expresses opposing views and insults.

Then the Soul returns, repentant. Once the Virtues have accepted her back, they turn on the Devil, whom they bind.

Then God is praised, with a procession of all the characters.