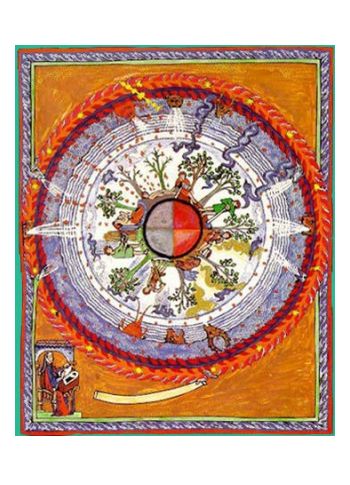 Hildegard of Bingen : her life and music

In the beginning all of creation flourished,
In the midst the flowers blossomed.
Afterwards barrenness descended.
-- Hildegarde's Celi

The last 30 years has seen a revival of the memory of the life of Hildegard of Bingen, her leadership as Abbess in the Benedictine order and her creativity. Her music, literature and correspondence have found a place in the lives of contemporary western Christians looking for a modern church heroine. In her time, she stood out from the corruption, misery and power structures of her era. She is a symbolic representation of a voice of dissension from within the church and a voice of transformation. Hildegard used the word viriditas or 'greening power' in her creation-filled theology. She spoke of "the earth's lush greening", "creation and humanity showered with greening refreshment, the vitality to bear fruit" and that "greening love hastens to the aid of all."

Hildegard was born in Bermersheim, Gaul, in the summer of 1098, at the time that Henry the Fourth ruled the Holy Roman Empire. Europe was in a phase of stability, population increase and heightening agricultural productivity. It was the sunset of the Dark Ages and the dawning of the Middle Ages. Europe was entering an era of growth of urban centres, cathedral schools and the founding of new religious orders, Cistercians, Carthusans and Premonstratensians. The first crusade was in 1099 when Hildegard was one year old. In many ways the stages of Hildegard's life from the enclosure of the monastic life through to her role as Abbess and travelling preacher, paralleled the awakening of Europe into the twelfth century. The Benedictine Monastery where Hildegard spent sixty years was at Mount St. Disibode. Disibode was a Scottish/Irish monk who preached the Gospel in the region in the seventh century. The Celtic connection and influence is strong in the expression of Hildegard's spirituality and her music.

Hildegard was the tenth child of Hildebert and Mechthilde, wealthy people of the nobility and at birth she was dedicated as a tithe to the church. Hildegard experienced to visions and trances, and lived with protracted illness from an early age. Her frequent illness and "'spiritual experiences" as a child led her parents to tile resolve to dedicate her to a religious life. Hildegard recorded in the Second Book of the Vita that she had her first visionary experience before she was five years of age. Hildegard was handed over to the care of Jutta at the age of eight years.

When she was eight years old she was enclosed at Disibodenberg--buried with Christ--that she might arise with him to immortal glory. Jutta, who was attached to the Benedictine monastery at Disibodenberg, was young and also from a noble family, and became Hildegard's exclusive private teacher and tutor. It was quite normal in the Rhineland in those days to enter a child into a convent, to be brought up a nun, a practice known as oblation.

The life in the Anchorage followed the structure of the monk's day with regular performances of eight offices of the Opus Dei. Variations to the rhythm were introduced in different places and in different seasons. Benedictine rule prescribed both prayer and work. Work meant differing things in differing eras, and in Hildegard's time, referred to intellectual and artistic work.

It was a life where intellectual horizons may have been limited, yet one which was potentially in touch with the entire tradition of Benedictine culture because of the physical proximity of her cell to the monastery.

Hildegard became Abbess at the age of 38 years after the death of Jutta in 1136. By the age of 42 years, Hildegard had been bedridden for three years. She interpreted her illness as a punishment from God:

Until I became sick, pressed down by the scourge of God. 1 was sick for a long time with many different illnesses.

Hildegard described her visionary experiences over a ten year period to her secretary Volmar, who transcribed them into the Scivias (Know thy ways).

And it came to pass in the eleven hundred and forty first year of the incarnation of Jesus Christ, Son of God, when 1 was forty-two and seven months, and the heavens were opened and a blinding light of exceptional brilliance flowed through my entire brain. And so it kindled my whole heart and breast like a flame, not burning but waning.

These visions provide the backdrop for the descriptions and colours of the performers and the stage in Ordo Virtutum. Hildegard composed a cycle of over 70 songs which together with her musical play, Ordo Virtutum (Play of Virtues) formed a "symphony of the harmony of heavenly revelations."

I have exalted humankind, with the vocation of creation. Humankind alone is called to co-create

In 1151, Hildegard pronounced a command from God to move the nuns from Disibodenberg to a new site at Rüpertsberg, a hill overlooking the junction of the River Nahe with the Rhine at Bingen, 3 miles from Disibodenberg. She took 20 nuns with her to Rüpertsberg, a barren place of contrast to the lush green environment of their former monastery. Hildegard's move to Rapertsberg was a sign of her desire and intention for independence for herself and her nuns.

Hildegard's independent spirit continued into her eighties with the burial of a young excommunicated priest in the grounds of Rüpertsberg. It has been reported that Hildegard did the burial herself in an unmarked grave to avoid the punishment of her nuns. The defiant move brought an edict of "silence" upon her community for one year, This was a severe punishment interrupting the expression of her musical spirituality.

For her convent, Hildegarde wrote the words and music of both hymns and canticles, in a strictly religious mode:

In contrast to the narrow scope of most chants in her day, Hildegard's music had a very wide range. She used extremes of register as if to bring heaven and earth together. By adding and omitting pitches and pitch groups in repetitions of melodic phrases Hildegard stretches and contrasts melodic phrases to create the "soaring arches" that are a familiar pattern in her music.

Plainchant usually never employed intervals larger than a second or third. Hildegard's music vaults upward and downward with wide intervals of fifths and fourths. She traverses the octave scale up and down with as much ease as she moved between the mystical world and the world of mundane affairs.

We do not know whether or not Hildegard used instruments to accompany chants at the monastery. We do know that she affirmed the use of instruments and considered them a means to soften the heart and direct it toward God. She gave certain instruments a special function and meaning.

Hildegard stood out as a controversial and critical voice against the political and ecclesiastical power structures of her era. She did this through her preaching, correspondence and acts of defiance and independence including her expression of feminine and creative spirituality in her music and lyrics:

For in you the beautiful flower
Blossomed forth which gave new
perfume to all the spices which had
Withered away, and they all
Appeared in full fruitfulness.
[O Viridissima Virga.]