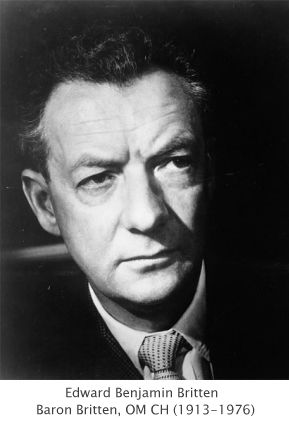 About A ceremony of Carols

In March 1942 Britten returned to Britain from America aboard Swedish cargo vessel, the Axel Johnson; the journey took nearly a month. At this time Britten had started Hymn to St. Cecilia and a piece for Benny Goodman. During the voyage they berthed at Halifax, Nova Scotia, where Britten came across a book of medieval poems, The English Galaxy of Shorter Poems, by Gerald Bullett, some of which he set during the voyage as the Ceremony of Carols. Britten had intended to write a harp concerto and so had been studying the instrument.

Scored for three-part treble chorus, solo voices, and harp, A ceremony of Carols is stylistically similar to Hymn to St. Cecilia. It was originally conceived as a series of unrelated songs, but later unified into one piece with the framing processional and recessional. The published score calls for boys (trebles), although the earliest sketches suggest a preference for women's voices.

"Framed by plainsong (the Hodie chant is proper to Vespers on Christmas Eve), and making use of medieval and 16th century poetry, the Ceremony is, in a sense, a forerunner of the church parables, those richly dramatic, biblically derived works of Britten's later maturity that are themselves parodies of medieval morality plays. The plainsong tune asserts its key role in the haunting harp Interlude at the Ceremony's mid-point. This sublime movement lays out the Hodie tune in the uppermost voice, swathed in an impressionistic, pointillist atmosphere that is worlds away from its ancient roots, but apt and urgent and poignant in context.

"The Ceremony of Carols is largely homophonic and dance-like, although counterpoint is essential to recreate the raindrop effect of 'dew in Aprille', the sun-lit duetting of the Spring Carol, and to reinforce the intensity of contrasts of the 'freezing winter night' where the 'silly tender babe' lies in a stable which itself becomes, by His very presence, 'a Prince's court'. Of special significance is the virtual Holy War between the new-born Babe and the powers of Satan described in 'This little Babe.' The angular, metrically irregular melody is set over a rhythmically relentless accompaniment. As the war between good and evil expands, the chorus separates first into a canon in two parts, then in three, expanding Southwell's poetic imagery to create a vivid picture of apocalyptic conflict---a picture replete with pressing contemporary references for Britten."

An acoustic environment such as St. Philip's is ideal foe the realization of Britten's Ceremony. Though he composed relatively little music for use in church services, he did write quite a number of pieces intended for performance in a church building. These works exploit acoustics and architecture in varying degrees.