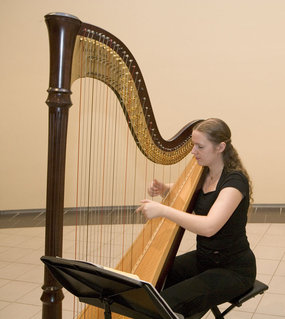 Britten's A Ceremony of Carols : the performers

Canberra harpist Teegan Peemoeller (pictured) commenced her harp studies in 1999, and gave her first solo recital at the age of eighteen. A student of Alice Giles, she has an Honours degree in Harp Performance at the ANU School of Music. She plans to continue her studies with Judith Liber in Italy, prior to entering the 2009 International Harp Contest in Israel. As well as her solo performances, she also enjoys playing chamber music and harp duos, and is a founding member of the Seven Harp Ensemble. She has played in numerous orchestras including the Canberra Youth Orchestra, Canberra Symphony Orchestra, New Zealand Youth Orchestra, Sydney Youth Orchestra, National Capital Orchestra, and the touring Oakland Youth Orchestra from America. Her Concerto performances readfile the Handel Harp Concerto, Mozart Flute and Harp Concerto, and the Ginastera Harp Concerto.