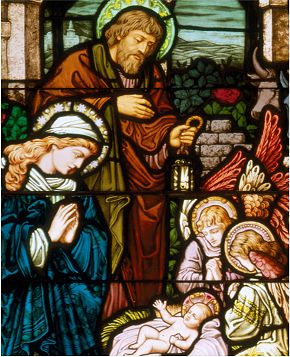 The Magnificat and Nunc Dimittis by John Tavener.

Tavener (of the 20th century) is known for his Song For Athene which was sung at the funeral of Diana, Princess of Wales, in 1997. The Magnificat was commissioned for the choir of King's College Cambridge and first performed in their chapel on 24 April 1987. Tavener's works are interesting because of his mix of styles, combining Eastern tradition with the English choral tradition. (Tavener was born English but is Greek Orthodox by religion, which comes out strongly in his composition.) The piece starts out very simply in Byzantine chant like style, but with the addition of more voices sounds more complex and builds throughout, ending as it began. This is a religious work and parts of the Greek Orthodox service have been incorporated into it. The refrain "Greater in honour than the cherubim" is one of the most thrilling parts of the work, where up to 13 parts are heard.

The Holy Boy by John Ireland (1879-1962)
John Ireland studied, and later taught, at the Royal College of Music. Benjamin Britten was one of his students of composition. Ireland's vocal output readfiled some ninety songs, the setting of Mansfield's Sea Fever probably his best known work. The Holy Boy, a setting of a poem by Herbert S. Brown, has become in popular for the simplicity and wonder it is able to evoke in the telling of the Christmas story.

The First Mercy by Peter Warlock Peter Warlock (Philip Heseltine) (1894 1930) had no speciallsed academic training in music. He did, however, number Frederick Delius amongst his friends and arranged many of Delius' orchestral works for piano. Under his own name, Philip Heseltine, he edited several series of old English lute songs. Under the name Warlock he composed many delicate song settings of early English poems. The First Mercy is a setting of a poem by Bruce Blunt.

Winter from Folk Songs of the Four Seasons, by Ralph Vaughan Williams
Vaughan Williams (1872-1958) was active in the collection and study of the English folk song. This cantata was first performed at the Royal Albert Hall on 15 June 1950. Vaughan Williams wrote: "I set my mind to work to find some unifying idea which would bind the whole together. It was not long before I discovered the necessary link, the calendar. The subject of our folksongs, whether they deal with romance, tragedy, conviviality or legend, have a background of nature and its seasons." He arranged the folksongs in various ways; unison, two-part and three-part harmony with and without accompaniment. Scored for women's voices, the work may be performed either with orchestra or with piano accompaniment.
"The Children's Christmas Song", for two voices with piano accompaniment
"Wassail Song", for all voices with descant and piano accompaniment
"Bethlehem City", for three voices (unaccompanied)
"God Bless the Master", for all voices with descant and organ

A Ceremony of Carols, Opus 28 by Benjamin Britten (1913-1996)
Britten wrote A Ceremony of Carols on a voyage from New York to England in 1942, along with his Hymn to St Cecilia. A Ceremony of Carols belongs in the tradition of the Anglican church. The text which is set around the Christmas story comes from early English and Scottish poems planting it deeply into English tradition, although the composition breaks away somewhat from the musical tradition of carol settings. They are not typically English like those you would find in The Oxford Book of Carols. This work explores a wide range of tonal and modal transformations. Britten tried to make it different, but still acceptable to the audience. Some of the 20th century works were becoming hard to grasp by audiences.

The work is said to celebrate childhood innocence through the music and text. Britten wrote a lot of music for children and with children in mind. This however does not have the spirit that most of his children's works have. It was written for boys, but here he was writing for boys who had the skills of the profession, that of cathedral choirs. The combination of the treble voices with the harp gives the music lightness which can be translated as an innocence. The harp provides a supportive yet quite subtle accompaniment and a small interlude for one movement. The whole effect is quite beautiful. Cantare's performance had young women instead of young boys, but the lightness of the voices was be apparent. The premiere of A Ceremony of Carols was in Norwich Castle in December of 1942, sung by the Fleet Street Choir and conducted by T.B. Lawrence.