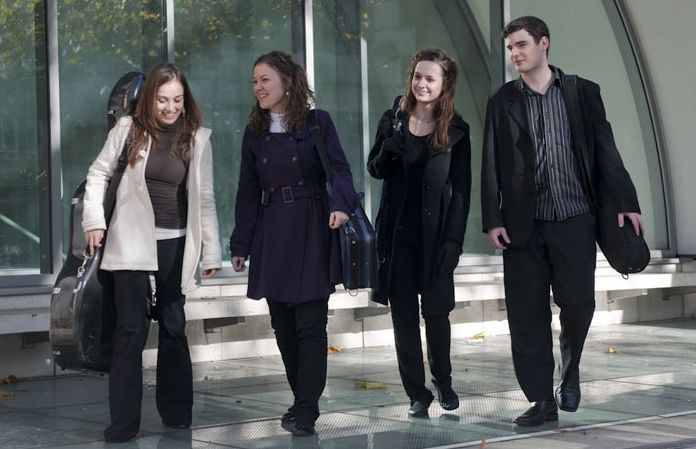 The Wilhelm Quartet was formed at the Royal Academy of Music in London in 2006 under the guidance of the late Howard Davies. In early 2009 the group won the Academy's Wolfe Wolfinsohn String Quartet Prize. The Wilhelm Quartet has studied with such distinguished artists as Christoph Richter (Heine Quartet), Levon Chilingirian (Chilingirian Quartet), Martin Outram (Maggini Quartet) and Thomas Brandis (Brandis Quartet), who was recently appointed the Griller Chair of Chamber Music at the Royal Academy.

The Wilhelm Quartet regularly appears in events and recitals in London and throughout the United Kingdom. In April 2009 they were selected to perform at the Wigmore Hall along with highly acclaimed singer Andrew Dickinson. In August 2009 the quartet performed to great acclaim as soloists in Elgar's Introduction and Allegro for String Quartet and String Orchestra.

The group is named after after King Friedrich Wilhelm II, who was King of Prussia in Mozart's day. He commissioned Mozart to write three quartets Mozart's last ones). Mozart wrote particularly prominent cello parts in these pieces as this was the instrument the King himself played.

The Canberra performance is part of the Wilhelm Quartet's second Crossroads Tour of regional NSW and the ACT, organised by the Australian String Academy.

Marciana has toured with the Wells Cathedral School Chamber Orchestra in Shanghai in 2005, with the European Union Youth Orchestra in 2006, and in Kazakhstan, Germany, Italy, Austria and Poland, with conductors such as Sir Colin Davies, Herbert Blomstedt and Vladimir Ashkenazy. In 2008, she played in a EUYO string quartet at the European Parliament in Brussels, as a Romanian representative. In May 2010, Marciana performed with other young Romanian musicians in a concert presented by the Enescu Society in London.

Marciana plays a Paolo Magginni violin lent by the Royal Academy of Music.

Margaret Dziekonski, who is originally from Philadelphia, USA, studied at the Settlement Music School under Lee Snyder, a former pupil of Ivan Galamian at Julliard. Following the BMus course at the Royal Academy of Music, Margaret is pursuing a Master of Music Performance and Research at the Academy.

Margaret has performed in United States and throughout Europe as a soloist and chamber musician. She plays a Panormo violin, c. 1800, lent by the Royal Academy of Music.

Glen Donnelly is from Gosford in New South Wales. He studied composition and now studies viola at the Royal Academy of Music. Since 2007 Glen has been Assistant Artistic Director of the Australian String Academy where he designs programs and events, helping to bring some of the world's foremost string players to Australia. With Charmian Gadd, in 2008 Glen co-founded the Crossroads Festival, an annual festival of chamber music in Australia now in its third year.

As a performer Glen has studied and had master classes with artists across the globe including Robert Masters, Roberto Díaz, Uzi Wiesel, and Charles Avsharian. He has performed as soloist at venues including the Sydney Opera House, Australian High Commission in London, Sydney Town Hall and across Europe, with the Ku-ring-Gai Philharmonic and Central Coast Symphony Orchestras, and in collaboration with members of the Macquarie Trio and the Australian String Quartet.

Glen plays a 1764 Deconet viola from Venice, on loan from the Royal Academy of Music.

Hetty Snell joined the National Youth Orchestra of Great Britain at the age of 13 and continued to play with them for five years, under conductors including Sir Collin Davis, Sir Simon Rattle and Yan Pascal Tortelier.

While at Wells Cathedral School, Hetty performed at the Wigmore Hall, and in the Cheltenham International Music Festival. She also participated in the Shanghai Arts Festival.

Following a memorable performance of Karl Jenkins' Mass for Peace 'The Armed Man' at Wells Cathedral in the presence of the composer, Karl Jenkins invited her to take the solo cello part for the piece again in the performance at the National Eisteddfod in Wales in the summer of 2006. Hetty gained a scholarship to the Royal Academy of Music to study with Josephine Knight.