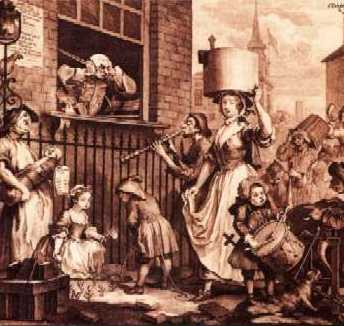 Notes extracted from an introduction by Risa S. Bear, University of Oregon, August 1992.

The Beggar's Opera is a comic farce, poking accurate fun at the prevailing fashion in Italian opera as well as the social and political climate of the age. It established a new genre, the "ballad opera," of which it remains the only really notable example, though its popularity led to the work Sheridan and eventually Gilbert and Sullivan. Gay cuts the standard five acts to three, and tightly controls the dialogue and plot so that there are delightful surprises in each of the forty-five fast-paced scenes.

Peachum, who is both fence and thief-catcher, sets the tone with his song of self-justification as he sits at his account-book:

Through all the Employments of Life
Each Neighbour abuses his Brother;
Whore and Rogue they call Husband and Wife:
All Professions be-rogue one another:
The Priest calls the Lawyer a Cheat,
The Lawyer be-knaves the Divine:
And the Statesman, because he's so great,
Thinks his Trade as honest as mine.

Mrs. Peachum comes in, and overhearing her husband's blacklisting of unproductive thieves, remonstrates with him over one of them, but easily goes along:

You know, my Dear, I never meddle in matters of Death; I always leave those Affairs to you. Women are indeed bad Judges in these cases, for they are so partial to the Brave that they think every Man handsome who is going to the Camp or the Gallows.

The middle-class criminal complacency of these two is shattered by their discovery that their daughter Polly has secretly married Macheath, the famous highwayman. Peachum's famous objection:

Do you think your Mother and I should have liv'd comfortably so long together if ever we had been married?

is seconded by Mrs. Peachum's:

Can you support the Expence of a Husband, Hussy, in Gaming, Drinking and Whoring? Have you Money enough to carry on the daily Quarrels of Man and Wife about who shall squander most? There are not many Husbands and Wives, who can bear the Charges of plaguing one another in a handsome way.

The parents conclude, however, that the match may make sense, provided the husband can be killed for his money. They depart, intent on this errand, and we find that Polly has hidden her man on the premises. She informs him of his danger, and there follows a touching duet, in spite of its intentional burlesque of popular love scenes:

MACHEATH. And I would love you all the Day,
POLLY. Every Night would kiss and play,
MACHEATH. If with me you'd fondly stray
POLLY. Over the Hills and far away.

Macheath's idea of escaping is to repair to a tavern and gather around him a company of women of dubious virtue. These, though they are of the lowest possible class of society, vie with one another in displaying perfect drawing- room manners, although the subject of their conversation is their success in picking pockets and shoplifting. Two of them, to Macheath's great surprise, have contracted with Peachum to capture him, and Macheath finds himself a prisoner in Newgate, the great City prison. Here, it develops, the jailor's daughter, Lucy Lockit, awaits her chance to upbraid Macheath for having promised to marry her, and reneged.

You base Man you,--how can you look me in the Face after what hath passed between us?-- See here, perfidious Wretch, how I am forc'd to bear about the Load of Infamy you have laid upon me--O Macheath! thou hast robb'd me of my Quiet--to see thee tortur'd would give me Pleasure.

Macheath succeeds in mollifying her, only to have Polly drop in at this inopportune moment, nearly ruining his chances of escape by claiming him for her husband in Lucy's presence. Macheath finds himself forced to pretend that Polly is crazy, and succeeds in forcing her to retreat--but something in the performance fills Lucy with foreboding: "But that Polly runs in my Head strangely." And she sings, affectingly:

If love be not his Guide,
He never will come back!

There would be, as the Beggar promised, difficulty choosing between the two young women, but for Lucy's capacity for violence and revenge. Macheath notices, and this would be fatal to her cause, were it not lost already:

LUCY. How happy I am, if you say this from your heart! For I love thee so, that I could sooner bear to see thee hang'd than in the Arms of another.

MACHEATH. But could'st thou bear to see me hang'd?

In spite of her fears, Lucy aids Macheath in his escape. Her father learns of Macheath's promise of marriage to her, and determines to learn from Peachum the status of Polly's possible marriage, for if Macheath is recaptured and hanged, his fortune will be subject to rival claims. Lockit visits Peachum, and they discover, while listening to a long-winded account by Mrs. Trapes, the whereabouts of Macheath. They conclude to go halves in him, and the chase is on. Mrs. Trapes shows the practical presence of mind that characterizes these underworld characters, by not presuming upon Peachum and Lockit's promise of a reward:

TRAPES. I don't enquire after your Affairs--so whatever happens, I wash my hands on't--It hath always been my Maxim, that one Friend should assist another--But if you please--I'll take one of the Scarfs home with me. 'Tis always good to have something in Hand.

Polly, meanwhile, goes to visit Lucy in hopes of working something out, little knowing that Lucy has resolved to poison her. In a fine takeoff on melodramatic murder scenes, Polly narrowly avoids the cup, and Macheath's recapture is revealed. In the scene memorialized by Hogarth, who was present on opening night, The two "wives" plead with their fathers, unavailingly, for Macheath's life. Then, in a moment of inspired burlesque, Macheath finds that his life has become too complex for him:

A scene, reminiscent of the interruptions in The Rehearsal, interposes, in which the Beggar explains that he would have provided a properly moral ending with the hanging of Macheath, "and for the other Personages of the Drama, the Audience is to suppose they were all either hang'd or transported." But the "taste of the town" will not allow this, for the people had not come to see a tragedy, and must have a happy ending. Macheath is brought back, to the general cry of "a Reprieve," and invites all to a dance of celebration, declaring to Polly that he acknowledges his marriage to her as binding.