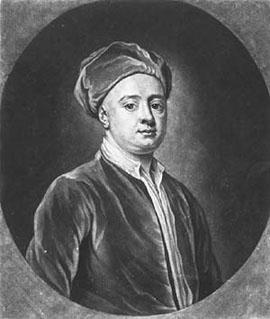 John Gay and The Beggar's Opera

extracted from an introduction by Risa S. Bear, University of Oregon, August 1992.

Baptized at Barnstaple, Devon, on September 16, 1685, during the reign of Charles II, John Gay was orphaned by the age of ten but raised by a kind uncle, who saw to his education at the local grammar school. On reaching adulthood, Gay was apprenticed to a mercer, but he disliked this occupation and found a post, in or near 1712, as secretary to the Duchess of Monmouth. In 1714, with the sponsorship of Jonathan Swift, Gay joined the household of Lord Clarendon, and journeyed with him to the Continent. Gay's friendly and ingratiating character won him many friends, not a few of whom were courtiers who found employment for him, either in their own households, or with the Government, throughout his life. Immediately after losing a small fortune in the South Sea Bubble, Gay was appointed Lottery Commissioner (!!), a post he held nearly to the end of his life. Gay never married, and divided his time among his friends, especially the Duke and Duchess of Queensberry and the members of the Scriblerians, including Swift and Pope.

John Gay produced, apart from The Beggar's Opera, a small body of prose and poetry ranging in quality from brilliant to drab. In 1712 was printed, but never acted, a short topical play, The Mohocks, concerning the exploits of a gang who had named themselves after a warlike Native American tribe:

Come fill up the Glass,
Round, round let it pass,
'Till our Reason be lost in our Wine:
Leave Conscience's Rules
To Women and Fools,
This only can make us divine.

Chorus. Then a Mohock, a Mohock I'll be,
No Laws shall restrain
Our Libertine Reign,
We'll riot, drink on, and be free. [All Drink.]

The point of this slight work, if it has one, seems to be that frolicsome gentlemen, by introducing chaos into society, have only themselves to blame if that chaos leads to their own downfall. The moral concern that drives The Beggar's Opera is found here, along with its sense of play and eye for detail; it is easy to see why the Scriblerians adopted Gay so wholeheartedly so early in his career.

In 1714, his The Shepherd's Week appeared, demonstrating a sustained competence in producing couplets which, in the pastoral tradition, oscillate gently between mockery and a sweet seriousness:

Ah woful Day! ah woful Noon and Morn!
When first by thee my Younglings white were shorn,
Then first, I ween, I cast a Lover's Eye,
My Sheep were Silly, but more Silly I.
Beneath the Shears they felt no lasting Smart,
They lost but Fleeces while I lost a Heart.

The What-d'ye Call it, a Tragi-Comi-Pastoral-Farce, was briefly staged in 1715. It has relatively little merit, or interest other than that Alexander Pope and John Arbuthnot seem to have assisted in the writing of it. Gay's concern here, as it would be in The Beggar's Opera, is the suffering imposed upon the poor by the rich in a corrupt society.

A year later, in humorous tribute to his adopted London, Gay produced Trivia: or, the Art of Walking the Streets of London. The inconveniences of life amid eighteenth-century urban hurly-burly are sharply chronicled:

Pent round with Perils, in the Midst you stand,
And call for Aid in vain; the Coachman swears,
And Car-Men drive, unmindful of thy Prayers.
Where wilt thou turn? ah! whither wilt thou fly?
On ev'ry Side the pressing Spokes are nigh.

In 1724, a rather stilted, if well plotted, tragedy, The Captives, was staged at Drury-Lane. In 1727, Gay brought out a collection of original verse Fables on the model of Aesop. They are good reading, despite their subsequent neglect, but they are overshadowed by the crystalline clarity and fine-honed irony of The Beggar's Opera.

Gay, with the encouragement of Swift and Pope, tried to interest Colley Cibber, the manager of the theatre at Drury-Lane, in putting on his new ballad farce, but encountered disdain. It is possible that the experienced Cibber liked the work, but mistrusted its considerable departure from accepted theatrical conventions and potentially dangerous political satire. The Duchess of Queensberry used her influence (and money: she promised to cover costs in the event of a loss) to convince another reluctant manager, John Rich of the Lincoln's-Inn-Fields, to take on the piece. Rich had had a mild success recently with a revival of The Merry Wives of Windsor, but had since found very little useful material to bring in the crowds, and was staging a number of unmemorable pantomimes, even playing the part of Harlequin himself (Schultz 11).

James Quin, the company's leading actor, was to have been Macheath, but felt himself a poor singer and uncomfortable with the role, and recommended the more obscure Thomas Walker, who was found backstage humming one of the songs in a lively fashion, and was hired on the spot. Walker was not, in fact, a great singer, but he brought to the role a romantic and aristocratic verve that was a perfect foil for the sweet and idealistic Polly. Miss Lavinia Fenton, a player with the company, who had been earning fifteen shillings a week, was found to be a very able singer for the part of Polly, and was engaged for the part at thirty shillings a week.

The first performance, on 29 January, began, it is said, with some concern on the part of the audience, for the departure from the conventions of the day was considerable. But the sparkling dialogue, witty satire, and ingenious ballads set to well-loved familiar tunes carried their own weight, and we have a report from Pope, as remembered by Joseph Spence:

We were all at the first night of it, in great uncertainty of the event; till we were very much encouraged by overhearing the Duke of Argyle, who sat in the box next to us, say, "it will do,--it must do!--I see it in the eyes of them."--This was a good while before the first act was over, and so gave us ease soon; for the duke, (besides his own good taste) has a more particular knack than anyone now living, in discovering the taste of the public. He was quite right in this, as usual; the good nature of the audience appeared stronger and stronger with every act, and ended in a clamour of applause.

The success proved overwhelming. The London weekly The Craftsman, on February 3, carried a short notice:

This Week a Dramatick Entertainment has been exhibited at the Theatre in Lincoln's-Inn-Fields, entitled the Beggar's Opera, which has met with a very general Applause, insomuch that the Waggs say it hath made Rich very Gay, and probably will make Gay very Rich.

Gay cleared over six hundred pounds, in fact, while Rich was enabled to begin construction on a fine new theatre in Covent-Garden. That year the Lincoln's- Inn-Fields performances ran to sixty-two, all to full houses, an unprecedented achievement. The play was staged in a number of other cities in England while the original London run was still in progress, and spread to Wales and Ireland, and was the first musical comedy produced in New York City. The Beggar's Opera was printed (and pirated) in many editions; the songs were sung everywhere, and prints of Miss Fenton as Polly were sold in all the shops. The actress was mobbed wherever she went, and eventually married a lord, the Duke of Bolton, who had been present on opening night and lost his heart upon first hearing her sing "Oh ponder well! Be not severe."

The Beggar's Opera is a comic farce, poking accurate fun at the prevailing fashion in Italian opera as well as the social and political climate of the age. It established a new genre, the "ballad opera," of which it remains the only really notable example, though its popularity led to the work Sheridan and eventually Gilbert and Sullivan. Gay cuts the standard five acts to three, and tightly controls the dialogue and plot so that there are delightful surprises in each of the forty-five fast-paced scenes.

The intent of the play is clearly to remind those in high place that corruption at their level leads to corruption and suffering throughout society. As such, it is a highly moral play, in spite of its apparent glamorization of the criminal life. . . . Following the success of the Opera, Gay wrote a sequel in which Polly follows her husband to the West Indies, which though never performed (it was banned by the Lord Chamberlain, presumably for the sharp satire it contained), sold very well in the bookshops. Gay also wrote, as he was nearing his end, a serious opera, Achilles, which was performed briefly at the Theatre Royal, Covent Garden, and allowed quietly to disappear into deserved obscurity.

To the end, although Gay was financially improvident, his loyal friends, particularly the Duchess of Queensberry, watched over him. He died in London in 1732, at forty-seven years of age. His remains were interred in the Poet's Corner in Westminster Abbey, and marked with an inscription which readfiled these lines:

Life is a Jest, and all Things show it:
I thought so once, and now I know it.

Gay was a serious artist, never more so than when producing satire; but it is fitting for the persona of the Beggar to pronounce his last rites.