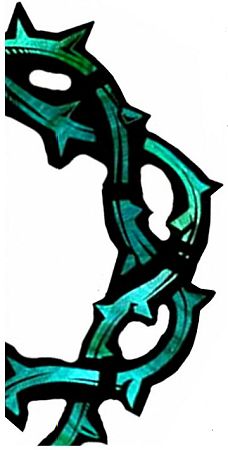 The Johannes Passion is the story of the capture of Jesus in the Garden of Gethsemane, his interrogation, trial and death. The participants are John the Evangelist (tenor); Jesus (bass); Peter (bass); Pilate (bass); four solo voices (soprano, alto, tenor, bass) a four-part mixed chorus and a chamber orchestra. Bach wrote the work in 1723 and used it as a Good Friday service for the Thomaskirche in Leipzig, where he was the newly appointed Cantor.

The tenor is the story teller, the voice of John the Evangelist, but no mere narrator. Bach brings rich emotional value to his words.

The chorus sings long and complex numbers to open and close the passion and voices the words of the crowd, soldiers, and other groups. The chorus and soloists also introduce and respond to the story.

The soloists' arias and the chorales of the chorus are placed at telling points in the narrative. Solo arias are characterized by their intricacy and imagery. The chorales are based on familiar hymn tunes, yet are full of rich and emotional harmony.

The instrumentalists have an important role especially in commenting movements. An aria may really be a trio for one singer with two instruments. In choral crowd scenes, the orchestra adds yet more voices.

There are two layers of commentary, one consisting of the arias, recitatives, and 'choruses’, the other of hymns or 'chorales'. The commentary has two purposes.
—The performance of the Passion on Good Friday not only told the story powerfully, but also taught its meaning.
—The several styles of music and words also give artistic interest and variety. The Evangelist's telling of the story contrasts with the arias and choir. The chorales are simple, familiar yet beautiful; the arias and choruses complex and challenging.

The account in John is less dramatic than in the other gospels and Bach makes it a subtle, intimate narrative. He also adds borrowings from Matthew for Peter's lament and the earthquake. The heart of the drama is in Christ's trial before Pilate. This is a Passion narrative; it ends with Jesus' death, not the resurrection.

Notes on the John Passion often mention its symmetrical structure. It begins and ends with two great choruses, the opening Lord, Lord and Master, a complex and compelling invocation, and the ending Lie still, lie still, a gentle graveside parting. Within this, Bach arranges musically similar choruses symmetrically around a central chorale. Nine choral movements, the last four mirroring the first four, revolve around the trial, as Pilate searches for a way to release Jesus while the Jews urge his death.

Bach pairs choral movements that share similar text or feeling.
—The music of the soldiers mockingly hailing the King of the Jews reappears when the priests demand that Pilate "write not that he is King of the Jews."
—The same chorale tune sets Peter's denial of Christ against Jesus' care of his mother.
—The turbulent orchestral tones of the opening chorus are echoed in the sinister in the choral cries of "crucify him" and in the orchestral accompaniments of the other angry-mob choruses.

Bach's St. John Passion is emotional and meditative. Its depth comes from a subtle complexity.