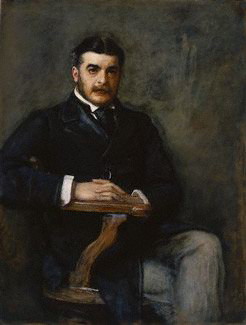 Five Knights and a Gondola,
or Sullivan and his satellites


Sir William Sterndale Bennett (1816-1875) wrote many of his works while studying in Leipzig. Later he was professor of music at Cambridge and Principal of the Royal Academy of Music. There is renewed interest in his piano music and Bennett's art songs are important examples of the genre in nineteenth century England.

Frédéric Emes Clay (1838-1889) was an English composer known principally for his stage music, two cantatas and separate songs. He was great friend of Sir Arthur Sullivan, who had a high opinion of Clay's work. Clay wrote four comic operas with W.S. Gilbert and introduced Sullivan and Gilbert to each other.

Sir Edward German (1862-1936) was a successor of Sir Arthur Sullivan in the field of English light opera. His patriotic comic opera Merrie England, set in the Elizabethan age, was staged at the Savoy Theatre in London in 1902.

Edvard Hagerup Grieg (1843-1907) wrote music valued by his fellow Norwegians in a time of growing national consciousness and independence. A pianist himself, Grieg composed often for the piano, notably in his ten volumes of Lyric Pieces, and in other sets of short pieces often drawn from Norwegian folk music.

Henry David Leslie (1822-1896) was a leading supporter of amateur choral music and higher education in music. He wrote symphonic works, operas and much choral music. "Annabel Lee", set to a poem by Edgar Allan Poe, is one of many songs he published for the Herefordshire Philharmonic Society, some of which became very popular

Felix Mendelssohn (Jakob Ludwig Felix Mendelssohn Bartholdy 1809-1847) was a German composer, pianist, organist and conductor particularly well received during his frequent visits to England, where many of his symphonies, concerti, oratorios, piano and chamber works were premiered. Mendelssohn was important in the revival of interest in J.S. Bach. His Lieder ohne Worte (Songs without words), eight cycles each of six lyric pieces, are among Mendelssohn's most famous solo piano works.

André Charles Prosper Messager (1853-1929) was composer and premiere conductor of Mirette, a light opera staged by the D'Oyly Carte Opera Company in London in 1894. Messager wrote much for the stage, as well as songs and instrumental works. His Véronique was more successful than Mirette, with 496 performances in the West End in 1904-05.

Sir Charles Hubert Parry (1848-1918) brought a distinctively English quality to western music at the end of the nineteenth century. He is particularly remembered for his song Jerusalem. Parry was director of the Royal College of Music and Professor of Music at Oxford, which afforded him little time for composition until the last, prolific, decade of his life.

Edward Solomon (1855-1895) wrote dozens of operas and operettas and was the composer and premiere conductor of two works at the Savoy—The Nautch Girl (1891) and The Vicar of Bray (1892). His Billee Taylor (1880) and Claude Duval (1881) enjoyed years of popularity on both sides of the Atlantic.

Sir Arthur Seymour Sullivan (1842-1900) is well known for his collaboration with W.S. Gilbert. He was also among the most important of English composers of his day, writing and conducting major orchestral works (notably his Irish symphony), a grand opera (Ivanhoe), choral works, ballet, hymns and other church music ("Onward Christian Soldiers"), songs, piano and chamber works.

Sir Charles Villiers Stanford (1852-1924) was influenced in his music by his Irish origins and musical studies in Germany. He composed in almost every musical form—symphonies, operas, concertante works, chamber, piano, and organ pieces, and large-scale choral works. His voluminous sacred music is foundational in the Anglican choral tradition.