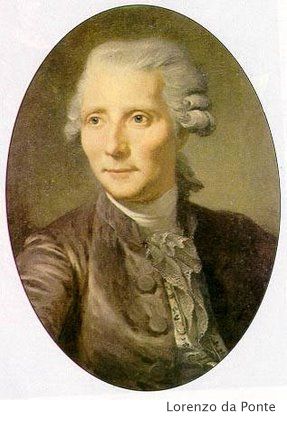 History and background of the opera

Written and composed at the suggestion of Emperor Joseph II, Così fan tutte, ossia La scuola degli amanti (Thus do they all, or the school for lovers) K. 588, is one of the three Mozart operas for which da Ponte wrote the libretto. (The others are Le nozze di Figaro and Don Giovanni.

The title, Così fan tutte, literally means "Thus do all [women]" but it is often translated as "Women are like that". The words are sung by the three men in Act II, just before the finale. Da Ponte had used the line "Così fan tutte le belle" earlier in Act I of Le nozze di Figaro.

The first performance was at the Burgtheater in Vienna on 26 January 1790, conducted by Mozart. The subject matter did not offend the Viennese of the day, but throughout the 19th and early 20th centuries it was considered risqué. The opera was rarely performed, and when it did appear it was presented in a bowdlerised form.

In the 1950's, including with a notable performance at the Metropolitan in 1952, Così fan tutte it regained its place in the standard operatic repertoire and is now frequently performed frequently.

Così fan tutte remains one of the greatest master pieces of comedy in music. Mozart's melodies are enormously faithful to character and situation that contain a charm, a sparkle, a technical perfection of form, an expressive virtuosity, and an utter spontaneity. Often, a serious musical number apes the style of the lamenting, heroic opera seria aria style and switches immediately to comic opera buffa, if anthing, underscoring the gentle irony of the work.

In the end, we are left with Così fan tutte's ultimate irony: who loves whom? Who marries whom? Those questions have spurred the scarch for and the attribution of an arcane subtext to the plot. Notwithstanding controversy, the opera is nevertheless a magnificent monument to the invention and ingenuity of the greatest musico-dramatic partnership in the history of opera: Mozart and da Ponte. That combination of Mozart's sublime music together with da Ponte's shrewdly contrived libretto has become one of the gems of opera: a perfect comic opera, full of subtleties, always inspiring us to debate whether to laugh or to cry . . .

Così fan tutte should also be viewed as hyperbole: an exaggeration for effect that is not meant to be taken seriously. In da Ponte's hands, it most assuredly has undertones--and overtones--of Enlightenment conflicts, ideology, and contradictions: those historic prejudices against women, their lack of power, the gender divide and the hypocrisies inherent in male attitudes to women. In the end, Così fan tutte may simply be a skeptical questioning of the Enlightenment, and in a certain sense, a bridge to 19th century Romanticism, and eventually, 20th century feminism. . . .

Così fan tutte with its tension between emotion and reason represents a bridge between the Enlightenment and Romanticism. Mozart and da Ponte stood in the middle of the bridge--at the centre of those two great ideologies--not quite sure on which side they belonged.

Nevertheless, Così fan tutte is a magic: a supremely lovely, funny, highly entertaining, enchanting, and satisfying comic opera. All the rest is commentary.