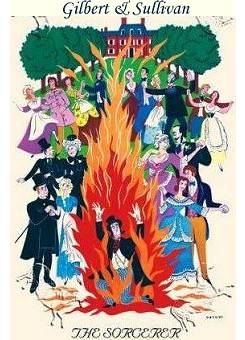 Review of The Sorcerer by Jennifer Gall

The Sorcerer by Gilbert and Sullivan, produced by CAMRA, St Philip's Church, 22 November 2004, reviewed by Jennifer Gall, ArtLook, no. 6, November 2004.

The Sorcerer was another entertaining offering from CAMRA and its directors Colin Forbes and Patricia Whitbread, featuring the singing students of Whitbread and Andrea Orwen. In the fine tradition of community productions, St Philip's Anglican Church O'Connor was transformed into a theatre. The acoustics are good and the set was cleverly positioned to suit the limited space. I particularly enjoyed the lighting, which created the effect of old-fashioned footlight-flares illuminating the actors' faces, and accentuated the illusion of being in the golden era of Gilbert and Sullivan performances in the late 19th century. The success of a CAMRA season is ensured by the enthusiasm and dedication of a cast that is pursuing the passion of musical performance, after working or studying hard in other day jobs.

While it was definitely worthwhile seeing this rarely performed Gilbert and Sullivan work, the music and libretto are simply not as skilful as the other G&S operas in the popular repertoire, and the cast had a hard task to bring The Sorcerer to life and keep it moving.

While Patricia Whitbread kept an experienced eye on the stage, Colin Forbes provided characteristically precise piano accompaniment for the singers, bringing skilful dynamics and humour to the music in the absence of an orchestra. Matthew Stuckings excelled himself with his conducting of the ensembles, managing to keep a stylish beat even while fielding a large rat (pet of the Sorcerer) tossed into the pit by an excited cast member.

On the evening I attended, Annette Gaykema played Constance, and I was impressed to hear her leave her familiar alto range and explore some challenging top A and B notes with precision and strength. Both Gaykema and Jessica Harris, who played Aline, have beautifully expressive faces, and their acting helped lighten the mood when the libretto was flagging. Harris's voice is sweet and true and combined well with her characterisation of the rapture-smitten lover of Alexis, played by Richard Phillips. Phillips did well as the rather arrogant young man, sustaining a lengthy and demanding vocal role.

Robert Clayton played a delightful Dr Daly, who abandoned the attempt to 'still his fluttering heart' and finally gained Constance after some lovely singing and a touch of magical intervention from the sinister Sorcerer, played by Stephen Hines. Hines gave a nice twist of ambiguity to the Sorcerer's character, alternating humour and mischievous menace in his performance.

Anastasia Dalziell, as Lady Sangazure, seethed quietly and convincingly with suppressed passion, while her beloved Sir Marmaduke, Anthony Hosking, gave a compelling and very amusing performance supported by an excellent voice. The village lads and lasses provided some of the most enjoyable singing in the Opera, demonstrating discipline and confidence.

The members of St Philip's deserve a blessing from the Canberra community for making their church available for performances like The Sorcerer , which keeps a wide, stimulating variety of music alive and thriving outside the more regimented performance venues.

Jennifer Gall works at the Canberra School of Music and as a consultant for the National Library of Australia.