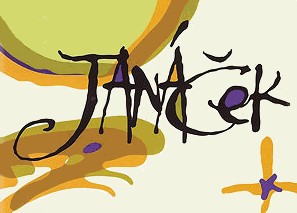 Janáček composed all his most important works for solo piano from 1900 to 1912. He probably began preparing his first series of Moravian folk melodies in 1900. At this time, the cycle had only six pieces intended for harmonium: Our evenings, A blown-away leaf, The Frýdek Madonna, Good night!, The barn owl has not flown away! and a Piu mosso published after Janáček’s death. These melodies provided the basis for the first volume of "On an Overgrown Path." Three of these compositions were first published in 1901 with the fifth volume of harmonium pieces Slavic melodies under the title On an overgrown path - three short compositions. The cycle had grown to nine pieces in 1908, and was intended for piano instead of harmonium at that time. The definitive version of the first book was published in 1911. On September 30, 1911, Janáček published the first piece of the second series in the Lidové noviny newspapers. The new series was created in its entirety around 1911. The complete second book was printed by the Hudební matice in 1942. The première of the work took place on January 6, 1905 at the Besední dům Hall in Brno.

Less experimental than his later works, these miniatures are reminiscent of Schumann and Grieg, but with the composer's own unique style evident. They are among the Janáček’s most understated and pained statements.

a piano sonata by Leoš Janáček

Leoš Janáček’s piano work 1. X. 1905 is also known as Piano Sonata 1.X.1905 and as From the Street. It is is a tribute to František Pavlík (1885–1905), a young wood worker bayonetted on 1 October 1905 during demonstrations in support of the Czech university in Brno. The premiere, at a concert of the Brno Friends of Music Club in January 1906 was played by Ludmila Tučková.

The two movements are:

Janáček also wrote a third movement, a funeral march, which he removed and burned shortly before the first public performance. He was dissatisfied with the rest of the composition as well and impulsively threw the manuscript into the river Vltava, later to regret his action.

The work was not recovered until 1924 when pianist Tučková announced that she has owned a copy. On 23 November 1924 there was a second ‘premiere’ in Prague under the title 1. X. 1905. Janáček incribed the score, published in 1924, "The white marble of the steps of Besední důmhere in Brno. The ordinary labourer František Pavlík falls, stained with blood. He came merely to champion higher learning and has been slain by cruel murderers."