Celebration of St. Philip's Day and recommissioning of the Hill, Norman & Beard organ. 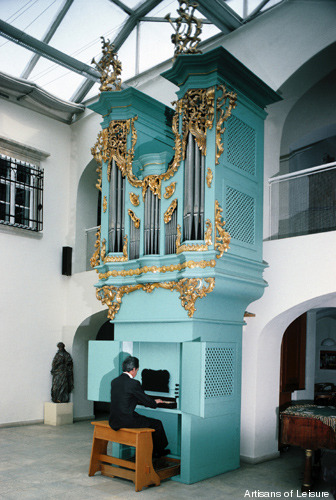 The St. John of God brothers (in German called the Barmherzige Brüder or Mercy Brothers) have long had a hospital at Eisenstadt in Austria. It was there that the Esterházy family, Haydn's patrons, were generous supporters of the Order.

Haydn wrote the Missa brevis Sancti Joannis de Deo ('Little Organ Mass') for the Brothers' modest monastery church, built in 1739 and still standing in the grounds of the modern Eisenstadt hospital. Unlike some masses, composed for concert performance, this Missa brevis is for use in church. Haydn may have written it as thanks for kind treatment by the monks of the hospital.

As the organ loft of the monastery church is small and the number of musicians and singers limited, Haydn's score had to be small in scale. It is written for just a few strings, and organ, four-part choir and soprano soloist.

Fourteen masses by Haydn survive, including two fragments found recently. He composed four, possibly five, short masses. The Missa brevis Sancti Joannis de Deo was his last in this form and probably dates between 1775 and 1778.

The name "Little Organ Mass" comes from the organ solo in the Benedictus. The small organ of the Barmherzigenkirche is of similar size to that of St. Philip's and is in full working order following complete restoration in 1969. 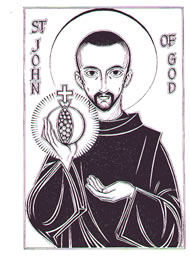 John was born John Ciudad in 1495 in southern Portugal. He left home very young and spent much of his life as a wandering shepherd, soldier, bookseller and labourer in Europe and North Africa.

In Granada at about forty he underwent a conversion experience so dramatic that he was put in a madhouse. This experience of the way the afflicted were poorly treated moved him to care for those in need. His love encompassed everyone, the sick, orphans, widows, prisoners and the poor.

In his hospital, John created an atmosphere of welcome, peace and hospitality. When patients were admitted John would first wash them and feed them and then pray with them. Many came to him with their problems. Even when he could not help, he listened and encouraged. Others were impressed by John's sincerity and service and gave food, money and their labour to help in the work.

John was an advocate of those without influence. He used his contacts with the noble and powerful to show them the conditions of the poor. He travelled to beg for gifts and then used them to serve the people of the local area, teaching by example. The order of 'hospitalier' brothers formed after the death of St. John of God in 1550 continue his way of service to those in need, the gift of hospitality.

The Missa brevis has the usual six sections: Kyrie, Gloria, Credo, Benedictus, Sanctus and Agnus Dei. In this short setting the Gloria and Credo, are condensed, with the Latin phrases overlapping each other.