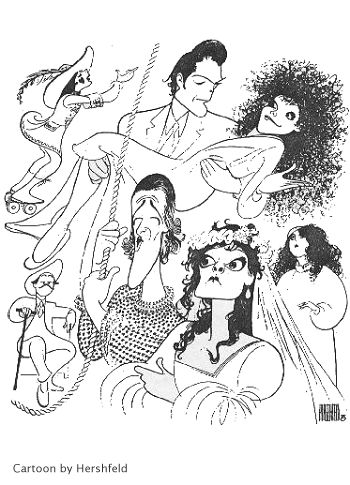 Count Almaviva's valet, Figaro is to marry the Countess's maid, Susanna. Figaro is measuring the space for their bed in a room in the Count's palace, near Seville. Susanna warns that a room near the Count's room is unwise because of the Count's amorous designs on her. Figaro, astonished and furious, determines to thwart his master's aims.

Marcellina, the Count's housekeeper tells lawyer Dr Bartolo that Figaro owes her money, and has promised to marry her if he cannot pay. Bartolo rejoices at revenge against Figaro by forcing him to marry this older woman, rather than Susanna. As Marcellina is leaving, Susanna enters and there is a brief but acrimonious encounter.

The Count's page, Cherubino tells Susanna he is to be sent into exile, as yesterday the Count caught him with Barbarina, the daughter of the gardener, Antonio. Cherubino wants to stay, for he is in love with the Countess (and all women). Seeing the Count approaching, Cherubino hides behind an armchair. The Count tries to woo Susanna but is interrupted when Don Basilio, Susanna's music teacher and the Count's factotum, nears. Now the Count hides behind the chair as Cherubino deftly slips around to sit in it, covered by a lady's robe.

Basilio tells her Susanna how Cherubino adores the Countess, infuriating the Count, who emerges from behind the chair. The Count relates his recent discovery of Cherubino at Barbarina's, and uncovers the page yet again.

Figaro comes in with a chorus of peasants who sing the Count's praises for recently abolishing the droit du seigneur. Figaro asks the Count to place a virgin's headdress on Susanna's head and give her away in marriage, but the Count sidesteps the request and postpones the ceremony, offering a lavish party in their honour later that day. As the peasants leave, the Count punishes Cherubino by ordering him to take a commission and foreign posting in the Count's regiment. Figaro light heartedly warns the nervous young officer about the rigors of military life.

Alone, the Countess mourns the fading of the Count's love. Susanna enters, then Figaro. Figaro tells the Countess of his plan to distract the Count from Susanna. He has sent a note telling the Count that the Countess has an assignation that evening with a lover; he also has Susanna invite the Count to meet her, and plans to send Cherubino, disguised as Susanna, in her place.

Figaro leaves and Cherubino arrives. He sings a love song he has written, and then Susanna playfully begins to dress him as a woman. She rushes off to find a piece of ribbon, and he is in his shirtsleeves with the Countess when the Count knocks on the door. Cherubino hides in the dressing room, but the suspicious Count senses his wife's confusion. He is convinced him that she has a lover within. Saying that it is only Susanna, she refuses to give him the key. The Count decides to get tools to break down the door, taking his wife with him and locking the door from the outside.

Figaro brings news that musicians have assembled for the wedding. The Count questions him about the letter he received earlier, having just learned from the Countess and Susanna that Figaro was its author. Figaro denies knowledge of it.

Antonio bursts in; some prize plants have been destroyed by someone leaping from the window in this chamber. Figaro says that it was he. Antonio tries to hand him a paper dropped near the broken pots, but the Count intercepts it and questions Figaro about it. The Countess recognizes the paper as Cherubino's commission and furtively informs Figaro; he says he had the paper because it needs the Count's seal.

As the Count reflects, Susanna says she is will yield to his desires. She plans to use the dowry he had promised her to pay off Figaro's debt to Marcellina. As she leaves, the Count overhears her saying to Figaro that their case is won. The Count realises he is being tricked. He is outraged that a mere servant can enjoy love with Susanna, while he is unhappy with his own wife.

Figaro, Marcellina, Dr. Bartolo and Don Basilio meet with the Count who rules on the advice of the lawyer Don Curzio that Figaro must pay Marcellina or marry her. But now it unfolds that Figaro is a foundling, Marcellina's long-lost son, and his father is Dr. Bartolo. Just as Figaro embraces his mother, Susanna enters. Her initial anger and confusion turn to happiness. The Count is once again frustrated. Marcellina and Bartolo decide to marry and make the day a double wedding.

Cherubino and Barbarina pass through the hall, talking of the plan to dress him as a girl.

The Countess, alone in her chamber, laments her lost happiness and the means she must employ to regain her husband. The Countess and Susanna continue plotting. The Countess dictates a letter to the Count--to be signed by Susanna--setting up a rendezvous. They seal it with a pin, to be returned in acknowledgment.

Peasant girls, led by Barbarina, come to bring flowers to the Countess. Cherubino, disguised as a girl, is with them, but is revealed by Antonio, who enters with the Count. The Count's anger is quickly diverted when Barbarina reminds him that he has promised her a favour in return for her affections, and she claims Cherubino as that favour.

Figaro urges that the party and dancing begin. A march is heard as peasants enter, sing once again in praise of the enlightened Count, and dance a fandango. The marriage follows, during which Susanna surreptitiously slips her note to the Count. Although Figaro did not see her hand it to him, he notes that the Count has apparently pricked his finger on a sealing pin while opening a love letter. Finally, the Count promises a fabulous party that evening to celebrate the weddings.

Barbarina searches the garden for the pin the Count had given her to return to Susanna, for she has dropped it. Figaro enters and she tells him of the lost pin. Not knowing about the plot, Figaro assumes the worst. He tells Marcellina, who runs to warn Susanna.

Figaro assembles Bartolo, Basilio and most of the other characters to hide in the garden and help him uncover his new wife's infidelity. He hides as Susanna and the Countess enter. They have exchanged clothes, and Susanna, having spotted Figaro hiding, sings raptly but ambiguously of her approaching bliss. Figaro's suspicions run wild.

The Countess, disguised as Susanna, awaits the Count. Cherubino stumbles in and makes a pass at her, stopping abruptly when the Count enters. The Count leads 'Susanna' to an arbour, but hearing Figaro pass by, hides himself. Figaro spots the 'Countess' (Susanna in costume) and says that the Count is with Susanna. Susanna forgets to conceal her voice, Figaro recognizes her and at last realizes what is going on. Teasing her, he pleads passionate love to the 'Countess.' Not seeing through Figaro's game, Susanna slaps him. Figaro quickly explains that he knew it was she, and the reconciled pair continue the charade for the returning Count. The Count, enraged at discovering Figaro making loving to a woman he thinks is the Countess, summons everyone to witness his wife's betrayal. Everyone begs him to forgive her, but he is adamant until he hears the true Countess's voice join the crowd. He immediately realizes what he has done, and kneels to beg her forgiveness; she cannot withhold it. As the opera ends, all joyfully hasten to the revelry.