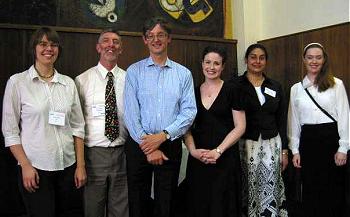 The story of CAMRA's Marriage of Figaro

In 2005, several singers met together on Saturday afternoons and workshopped scenes from Figaro. They decided to take the project further, with a performance of highlights from the opera. Rather than just a 'concert' we decided on a semi-staged version to add interest and enjoyment. The singers themselves took responsibility for most of the production. Some of the arias were sung in Italian and some in English.

The Cherubino character was used a narrator to keep the audience up to speed with the intricacies of the plot, in place of the recitatives. This also made the cast smaller.

The performance was well received. So encouraged were we by the results, that we decided to present Marriage of Figaro in full in 2007, entirely in English.

Acknowledgement: Paul Cambridge and Wiebe terBals came from other studios to assist us.