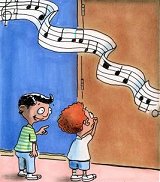 Why did we put on a cross-dressing concert? First, it was hilarious! Secondly, it was a chance for singers to explore music outside their normal repertoire. While singers have an enormous selection from which to choose, they are limited by songs that are distinctly gendered. Crossover was our chance to sing that song that we love, that one we belt out in the shower, but could never perform to an audience because it was written for the opposite sex.

We saw sopranos become tenors and bass-baritones become mezzo sopranos. We heard many songs we know and love, but sung in an entirely different register, and perhaps slightly hammed up.

Opera is a lot of things — tragic, funny, dirty, dramatic, politically incorrect or a combination of them all. Even though it's performed in foreign languages and trotted out in posh venues for audiences dressed to the nines, opera is not 'serious business.'